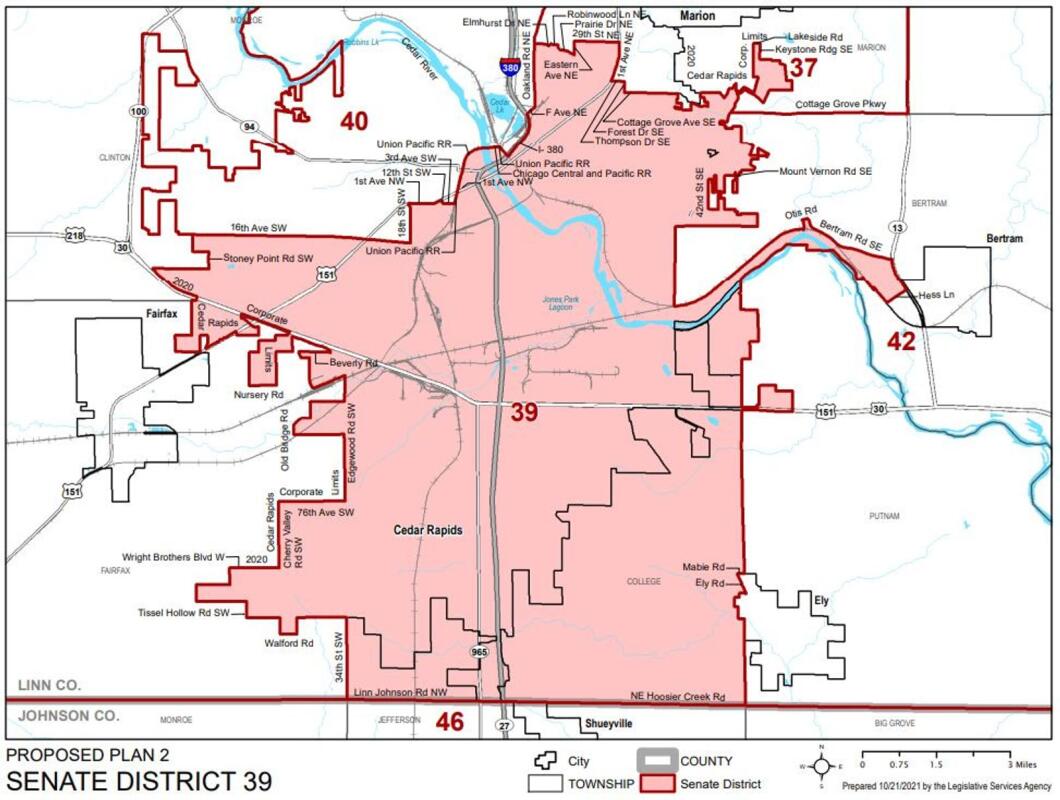 There are some intriguing primary races coming up in June around these parts. One of them is in the new Senate District 39.

The redesigned district covers much of Cedar Rapids, including the southwest side, downtown, and parts of the southeast and northeast quadrants. This is good territory for Democrats. The winner of the Democratic primary will likely be heavily favored by Republican Edward Bernie Hayes, who challenged Sen. Rob Hogg, D-Cedar Rapids, and lost big in 2018.

Hogg lives in the new district but announced last year that he would not run again. This sparked a stampede from several Democrats interested in running for the seat.

Now that the dust has settled, the primary race pits state Rep. Liz Bennett, D-Cedar Rapids, against Ironworkers Local 89 political director Joe Zahorik. Bennett served in the House for eight years while Zahorik was a labor organizer for several years and also worked for the Democratic Congressional Campaign Committee.

The local scuttlebut among the politically inclined is that this showdown was sparked by a missed vote.

On Feb. 24, the House passed a bill, Senate Docket 183, that would allow public entities to use what’s known as the Construction Manager’s at-risk bidding process while prohibiting the design-build tendering system. Design construction is currently permitted for Regent’s Universities. Anti-union provisions would have affected the collective agreements that unions have with contractors.

So it was a bad bill for unions. But opponents of the measure managed to win the support of 11 Republican House members for an amendment that would have removed anti-union language. It would be tight, but the unions had the votes to kill the bill.

The bill was debated in the House just after 10:30 a.m., according to the House Journal. When the worker-supported amendment was put to a vote, it was defeated by a tie vote 49-49. Bennett missed the crucial vote. Another Democrat, Rep. Phyllis Thede, D-Bettendorf, was also absent.

“So here’s the deal. I am a human being. I was late,” Bennett told me last week. She was there to vote for other Democratic amendments, which failed, and to vote against the final bill.

“I deeply regret missing that vote. I think my Labor election record shows that I have been a fighter for working people. I have a lifetime AFL-CIO voting record of 97%,” a Bennett said.

Is that why Bennett drew a main challenge?

“I don’t want to read into people’s intentions or speculate,” Bennett said.

Zahorik told me that the missed vote was not the reason he decided to run.

“That’s just not true,” said Zahorik, who began collecting signatures to run in February before the failed vote, according to the Iowa secretary of state’s office. The majority of his signatures were collected in early March.

“I don’t want to be negative towards my opponent in any way. I think I can be a better representative for the district,” Zahorik said.

Zahorik said Senate District 39 is the third most “labor-dense” district in the state. He argues that his years as a union organizer make him uniquely qualified to represent it. He has spent his career working to get working-class voters to vote for the Democrats. Now he wants to represent them in the Senate.

“I think that makes me feel most qualified for tough battles against stacked odds,” Zahorik said, pointing to efforts by the Republican majority in the Legislature to undermine workers’ rights, such as a recent vote for cut unemployment benefits and the GOP’s refusal to enact anti-wage theft bills. It has been endorsed by the Iowa Federation of Labor and the Hawkeye Labor Council.

But Bennett also has a history of opposing anti-labor legislation. Bennett has also had some success in the Republican House making progress on legislation supporting youth mental health and banning the use of gay and transgender panic as a legal defense. Being in the minority all his time in the House made it difficult to pass a lot of things.

“I am an experienced and proven leader who has built a great coalition and stood up for a lot of people. And that’s what we need in the Senate,” Bennett said, noting that Hogg endorsed his candidacy.

Bennett, a singer, is a member of the American Federation of Musicians Local 137 and has its endorsement.

You might be wondering if it’s wise for Democrats who face tough challenges across Iowa’s red-leaning legislative map to devote time and resources to fighting. It’s a valid question.

But I’ve always believed that competitive primaries are good for a party, candidates and voters. That’s especially true in a race for an open seat and one that’s likely to be held by Democrats. The primary is the real competition. The winner could be in office for a long time. It’s good to have choices.

So it’s the organizer versus the coalition builder. The primary is June 7.