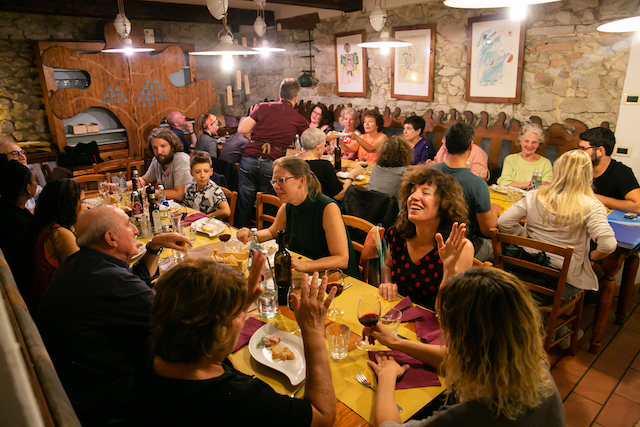 The Anna Bonavita non-profit tour series uplifts the cities she explores while immersing visitors in a rejuvenating culinary, cultural and community experience.

Science launched Anna Bonavita’s career, but an appreciation for art led her to create an Italian film festival, cultural center and a series of very personal and connoisseur-level cultural tours in Italy.

After immigrating to the United States to work in Minneapolis, her search for friendship, community, and the familiar comforts of Italy prompted her to start the film festival. A random event sparked a romance with an Italian senator, who came to Minneapolis to help him set up the cultural center, and the two got married.

After cancer took her life, Bonavita’s grieving and healing process led her to explore the small towns of her native Emilia Romagna. These towns hold remarkable treasures, but the lack of jobs is forcing young people to leave, precipitating a slow decline. From the ashes of Bonavita’s grief was born a desire to help, and Espérienza, a nonprofit touring series, was born.

She designs tours that include language and culture, but also exquisite meals in world-class restaurants. Interrupted by COVID, the tours will continue next year, and Bonavita will make sure they allow enough time for attendees to develop relationships with Italians and experience the delights – gastronomic, artistic and otherwise – of the Italian life.

Bonavita spoke to Fra Noi from her home in Minneapolis.

Fra Noi: You grew up in Bulgaria. How did you develop an affection for Italy and how did you come to the United States?

As for how I got to the United States – well, again, it comes down to politics. At the end of the Cold War, the economy collapsed and there were no more jobs. I had just graduated from college. I have a doctorate. in physics, it was therefore possible to leave. I was fortunate to be able to come and do research at Carnegie Mellon University in Pennsylvania. Then I moved to Minneapolis for a job. But I found myself isolated, and I started to think about starting an Italian cultural center because I knew that many Americans were fascinated by Italy.

Fra Noi: Tell us how you met your husband.

Bonavita: In 2003, I went to a wedding in England. A friend in Emilia Romagna had had a bicycle accident, so I took a flight to Italy to see her. It was there that I met my husband, who at the time was one of Emilia Romagna’s senators for the Republic of Italy. When he retired, he decided to discover America. So he joined me in Minnesota in 2006. We got married in 2010.

Fra Noi: Have you and him sought Italian identity in one way or another?

Bonavita: I started working at the Italian Cultural Center (Minneapolis) in January 2006. It happened in September, and we had the grand opening. It all started because we wanted to have an Italian film festival but had to pay for a theater. Someone suggested setting up an Italian cultural center and charging the income from language courses. We did and it turned out to be successful. In 2009, I became director of the Italian Film Fest in Minneapolis / St. Paul. I believe in sharing the beauty of Italian culture; it belongs to humanity.

Bonavita: Yes, the cancer took my husband away. But despite that, I feel like meeting him was one of the greatest gifts of my life.

When he got sick we moved to Italy so he could be close to his family and friends. After her death, I didn’t want to come back because it was a painful experience. But the universe works in an amazing way. When you struggle, people come forward and help you. And this is how I discovered the friendships of the inhabitants of these small towns. A woman took me to this small town, Pennabilli, to show me the beauty.

So many aspects of this city appealed to my soul. I kept going back, and eventually I made some friends there. But it is losing young people; there are no jobs. So I thought, “Let’s do a summer Italian program here and bring some life to it. But I am a foodie and I studied seriously, and I thought of offering a gastronomic tour as well. This is how Esperienza was born.

Fra Noi: How has the Esperienza evolved?

Bonavita: Planning started in 2017, and the first group arrived in August 2018. I worked with a group of volunteers, and we did it all.

So we took the group to Osteria Francescana, Massimo Bottura’s restaurant, which was declared the best in the world, but also to Casa Artusi. We went from casalinga cuisine, essential to understand Italian cuisine, to Massimo Bottura. It was extraordinary.

We had a deep immersion language course. We brought an orchestra and danced and sang with the residents. We arranged with a local butcher, museum, bar and grocery store for our students to “help” them for about an hour. This gave our participants the opportunity for direct interaction.

From the start, Espérienza offered a different type of trip: connecting with people. We have also imagined trips that benefit the local environment, the cultural heritage, the community, the economy. When we make profits – next year, I hope – 100% will go to local projects. Our trip is carbon neutral.

Fra Noi: What are your future projects?

Bonavita: We decided to look ahead to 2022 because it could be a bit risky this year. We will therefore do two linguistic immersions: one in Pennabilli and one in Verucchio, such a fascinating place. Villanova culture was based there. It is pre-Etruscan. If you could just see the jewelry these women wore five centuries BC – beautiful! We will do a special immersion focused on food and language.

In total, we will do two linguistic tours, two culinary tours, a mosaic tour in Ravenna, known as the capital of mosaic, and one in Faenza, the ceramic capital of the world.

Fra Noi: Why is it important to save the cities of Italy where the population is decreasing?

Bonavita: I was born in a village, and I enjoy this way of life. I believe that, especially after COVID, people will realize that we derive the most joy from being with small groups of people. In these cities there is so much beauty, so many opportunities for relationships. What makes us human is in these places; kindness, generosity, the joy of sharing, the opportunity to explore. This is where we are at our best.

The above appears in the August Issue 2021 of the print version of Fra Noi. Our gorgeous monthly magazine contains a veritable feast of news and perspectives, profiles and features, entertainment and culture. Register, Click here.

This bedside caddy organizer is only $ 13 on Amazon