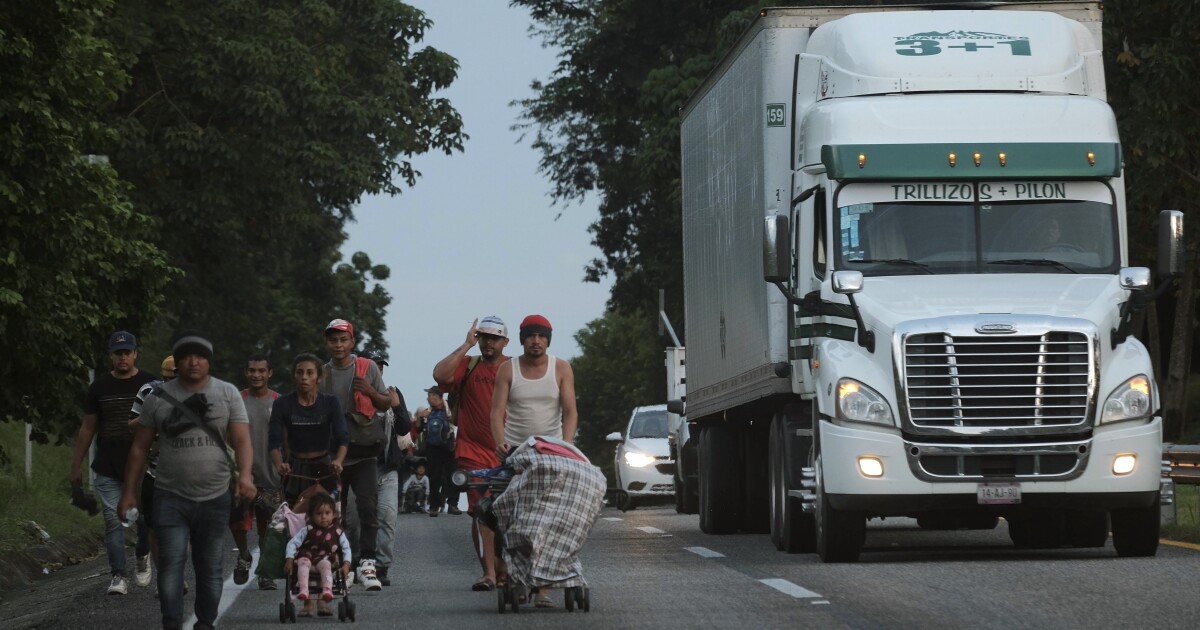 The leader of an effort of Central American migrants to cross southern Mexico on foot said on Monday the group would now head for the US border, rather than Mexico City as originally planned.

Leader and immigration activist Irineo Mujica said in a video that he would try to organize another caravan of thousands of migrants to reach the Gulf Coast state of Veracruz, where the two groups will join and depart for the southern border of the United States.

The apparent change in plans comes after Mujica said the group had been chased and harassed by Mexican government officials. Relations soured after a group of migrants pelted Mexican National Guard officers with a hail of rocks on Thursday, injuring five guard officers.

The change of plans may be an act of desperation: the group is shrinking after more than two weeks of marching through searing heat, and can now number as few as 1,300 people. It had once been as large as 4,000.

The group of mostly Central American migrants received a cold reception on Monday when they entered Oaxaca state. The city of Chahuites initially refused to let them in for fear of spreading COVID-19.

Adrián Aguirre, a migrant from Nicaragua, said that when the group arrived in Chahuites, “there were municipal police cars blocking the way, then later we entered.” But many shops in town closed when they saw the migrants arriving, meaning they were unable to buy food or drink. They settled in a park to spend the night.

The Mexican government has tried to discourage the march, saying the poor conditions put the lives of migrants at risk. The National Institute for Immigration said six cases of dengue had been detected among members of the migrant march.

National Guard officers were following the march on Thursday and had apparently tried to arrest some of the migrants when a group of 100 to 150 men began throwing rocks at two trucks loaded with guard officers equipped with shields and helmets in plastic.

The Guard said in a statement that four male officers and one female officer suffered “considerable” injuries and were hospitalized. He said that “at no time did the officers respond to the attack”.

National Guard officers have been reluctant to confront the migrants since a shooting incident the previous Sunday left one dead.

Clashes between law enforcement and migrants had been relatively rare in Mexico, but National Guard officers opened fire on a pickup truck carrying migrants on Sunday when the vehicle tried to avoid a checkpoint in immigration. The guard said the truck attempted to ram a patrol vehicle.

A Cuban migrant was killed and four other migrants were injured.

Mexican President Andrés Manuel López Obrador later said the shooting was unjustified and that the pickup – apparently driven by a suspected migrant smuggler – had simply tried to drive past the checkpoint, not crash into the vehicle. the guard. The custody officers involved are now the subject of a federal criminal investigation.

About 4,000 migrants left on foot from the town of Tapachula, near the Guatemalan border, on October 23. They made slow progress trudging along highways in the region’s brutal heat, advancing only about 95 miles in nearly two weeks.

Much larger caravans passed through Mexico in 2018 and 2019, but these migrants never attempted to travel the full distance. They usually caught rides on passing trucks.

Mexico has told truckers not to pick up migrants, saying they could be charged with migrant smuggling.

A National Guard officer was killed by suspected migrant smugglers in September. And a dozen members of an elite police force in the northern border state of Tamaulipas are on trial for the deaths of 14 Guatemalan migrants and five others, whose bodies were found shot and burned near the American border at the end of January.

Frustration has been building for months among the thousands of migrants waiting in Tapachula near the Guatemalan border. Mexico’s strategy had been to contain migrants in the south, away from the US border, while allowing them to seek asylum in Mexico.

But Mexico’s asylum system has been overwhelmed, and the slow process has led many to decide it’s not worth the wait.

Never lose your keys again with this organizer with integrated Tile