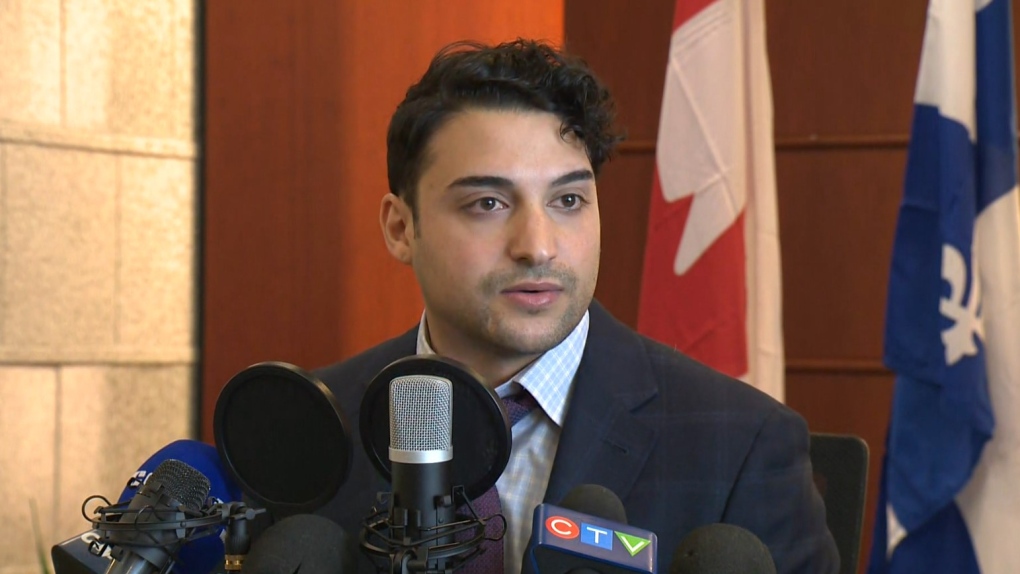 The man who organized a ‘plane party’ of Quebec influencers on an ill-fated New Year’s trip to Mexico says he now plans to sue Sunwing, the airline that brought them in on a charter flight before to cancel their return trip.

James William Awad told a news conference on Thursday that the legal action could extend to Air Canada, which declared the group a security risk and also refused to fly them home.

Air Canada and Sunwing have not yet responded to requests for comment.

The group’s behavior on the flight south of Montreal got them into hot water, with videos showing passengers not wearing masks, partying and drinking in the aisles. Some are reality TV stars, and others have high-profile social media accounts.

A participant also revealed that several people had tried to fake their COVID-19 tests, although Awad insisted on Thursday that this was not true.

He argued that Canadian airlines – Sunwing, Air Canada and Air Transat – had no right to leave the group stranded in Mexico for days after their scheduled return to Quebec.

Awad did not explain the potential claim against Air Canada, but said that when it came to Sunwing, “we are pursuing the fact that they are not honoring contracts.”

Ultimately, some people were forced to find circuitous routes through the United States and Panama to get home, he said Thursday. Others have given up on returning home, at least for a while, he said.

“There are a lot of people who stayed in Mexico to keep the party going, because they knew we were banned, so they decided, ‘You know what? I’m just going to stay over there for a while,'” he said.

“The last person who stayed there because of the ban was at most, maybe a week… There are a few people who [had] go to the United States, some people [had] to go to Panama, some people have to go to different countries to come back. For me, it was very worrying.”

Awad himself returned to Quebec a week and a half ago, when he said he rented a U-Haul truck in New York and crossed the border in the middle of the night. Quebec police ticketed him at the time for violating the province’s 10 p.m. curfew, which was in effect at the time.

In early January, when Sunwing canceled the return flight, the company told CTV News it did so for safety reasons.

In order to board the return flight, the tour group was presented with terms and conditions “to ensure the safety of crew and passengers”, the airline said at the time.

“Unfortunately, the band has not agreed to all of the terms,” ​​its statement read. “As a result…we have made the decision to cancel the return flight.”

Awad later claimed that he agreed to all the terms presented, but insisted that the group be given food, which the airline would not.

Awad also said on Thursday that no member of his group had so far faced legal consequences for his involvement, although authorities said earlier this month they were looking into at least a dozen possible offences.

A spokesperson for the Quebec Crown prosecutors’ office confirmed that the files were still under investigation.

“No lawsuit has yet been brought in the cases that have been filed recently, since this analysis is still in progress,” said Audrey Roy-Cloutier.

“Several investigations” are underway by “different organizations” into various potential breaches, she said.

“We remind you that the information concerning a file becomes public when a criminal charge is laid or a statement of offense is served, which is why we cannot provide more details on this subject for the moment.”

Public health authorities earlier clarified that the offenses they were looking at did not involve on-flight behavior, but rather potential breaches of COVID-19 rules regarding quarantine, testing and other travel restrictions.

One participant in the trip, Rebecca St-Pierre, 19, told media at the time that she knew people had used petroleum jelly to try to fake their COVID-19 tests. But Awad said he didn’t know anything about it, saying the idea had just been mentioned in a group chat.

“I don’t know if it was a joke or anything, but nobody really took it seriously, and I don’t know anyone who did it,” he said.

Awad claimed that only a minority of passengers on the Dec. 30 flight behaved irresponsibly and that it was unfair for others to be punished for their actions.

However, he also said he owed an apology to Canadians who were annoyed to hear about the group’s flight.

“We’ve all been through this COVID” for two years, he said.

“I can understand why people at home feel this way. I would like to apologize to the people who broke the rules.”

The repair shop experts and their partners - Will Kirk, Jay Blades, Suzie Fletcher and more