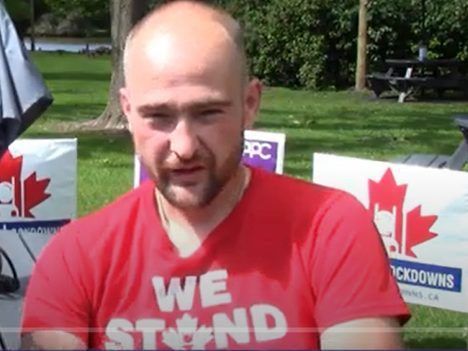 A Stratford man who helped organize local protests for the group No More Lockdowns Canada has been charged with four criminal offenses following a recent human trafficking investigation.

Court documents show Jason Cook was arrested by Stratford Police on September 23. The charges against him stem from an investigation sparked by a complainant who reported to police that month that she had been trafficked in 2012 when she was 15.

The charges include trafficking a person under the age of 18 for the purpose of exploiting or facilitating their exploitation, obtaining a material benefit knowing that it resulted from an offense of human trafficking human beings, the fact of living in part on the avails of prostitution and the recruitment of the victim to become a prostitute.

Cook was released on bail following his arrest, police said.

A representative for defense barrister James Zegers appeared virtually on Cook’s behalf in a Stratford courtroom on Monday. After a brief discussion, Ontario Court Judge Sharon Roberson adjourned the case to February 7, 2022 and issued a publication ban covering information that could lead to the identification of the victim.

Police confirmed on Monday that Cook is the same man who organized the Stratford events for No More Lockdowns Canada earlier this year. An opportunity for Cook to comment through his lawyer on Monday was denied.

Emails to the Stratford branch of No More Lockdowns Canada were not immediately returned.

Cook and other prominent members of the group, including former MP Derek Sloan, Aylmer Church of God pastor Henry Hildebrant and MP Randy Hillier, have been charged with failing to comply with an emergency order following an anti-lockdown rally in late April in Stratford.

One of the 14 people charged following the rally pleaded guilty in Stratford Provincial Offenses Court. The others, including Cook, are due to appear next in connection with those charges in December.